The “drilled” motor will use low-loss magnetic material

An Australian start-up is developing a new generation of smaller, lighter and more efficient electric motors based on a new magnetic material called Aeroperm which has energy losses one tenth of that of existing magnetic materials used in electrical appliances of today.

Based in Melbourne Magnetic kite, founded in 2021, has attracted A$1.85 million (US$1.16 million) in seed funding to design, build, test and fly electric motors for two-seat electric aircraft. The company is building an electric motor test facility and hopes to fly its first electric motor on a crewed aircraft as early as next year.

The low-loss Aeroperm magnetic material was co-invented at Australia’s Monash University by Professor Kiyonori Suzuki and Dr Richard Parsons, Founder and CEO of Kite Magnetics. The magnetically soft material is composed of nanoscale crystals in an amorphous metallic matrix.

“Aeroperm’s stunning nanocrystalline microstructure means it has one-tenth the energy loss of existing magnetic core materials used in electric motors today, allowing us to design what we believe to be the most efficient electric motors and generators in the world,” says Parsons.

“Our electric motors will allow electric planes of all sizes to fly farther and carry more, reducing running costs and enabling sustainably powered planes to fly more routes sooner,” he adds. “Today, the global aviation industry contributes around three times more to climate change than all of Australia’s emissions combined, so helping to accelerate the adoption of electric aircraft is our top priority.

“Apart from aviation, we also see our electric motor and generator technology supporting a wide range of other industries as it matures – such as cars, buses, ships and trains.” 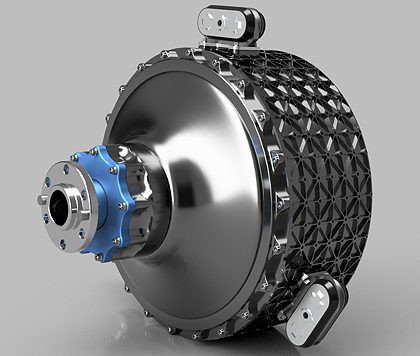 Kite Magnetics hopes to become a dominant player in the electric propulsion market for aviation. It plans to build electric motors for aircraft of all sizes, including those powered by hydrogen fuel cells.

According to Parsons, Kite is “developing the technologies required for a new era of electric aviation – safer, quieter, significantly cheaper and emission-free aviation.”

Aeroperm magnetic material has much lower losses than existing materials