Recently I tried to slow down time. The last few years working on Jenkem have been incredibly rewarding, but they went by far too quickly and most of the time I was worried about the company, if I was crazy, or what the next thing we could do do was to really be present and enjoy it.

Consequently, I tried to cram into so many new experiences and encounters over the past year as I can to get off autopilot and experience all that the skate community has to offer, warts and all.

Here are some highlights of this very nomadic summer full of competitions. I hope I can give you some insight or little bits of information that will make this read rewarding enough for you to stick around. I know these kind of articles are more for real chefs: no algorithm pushes you here, no YouTube tourists are invited. Let’s keep it that way. You and me baby. 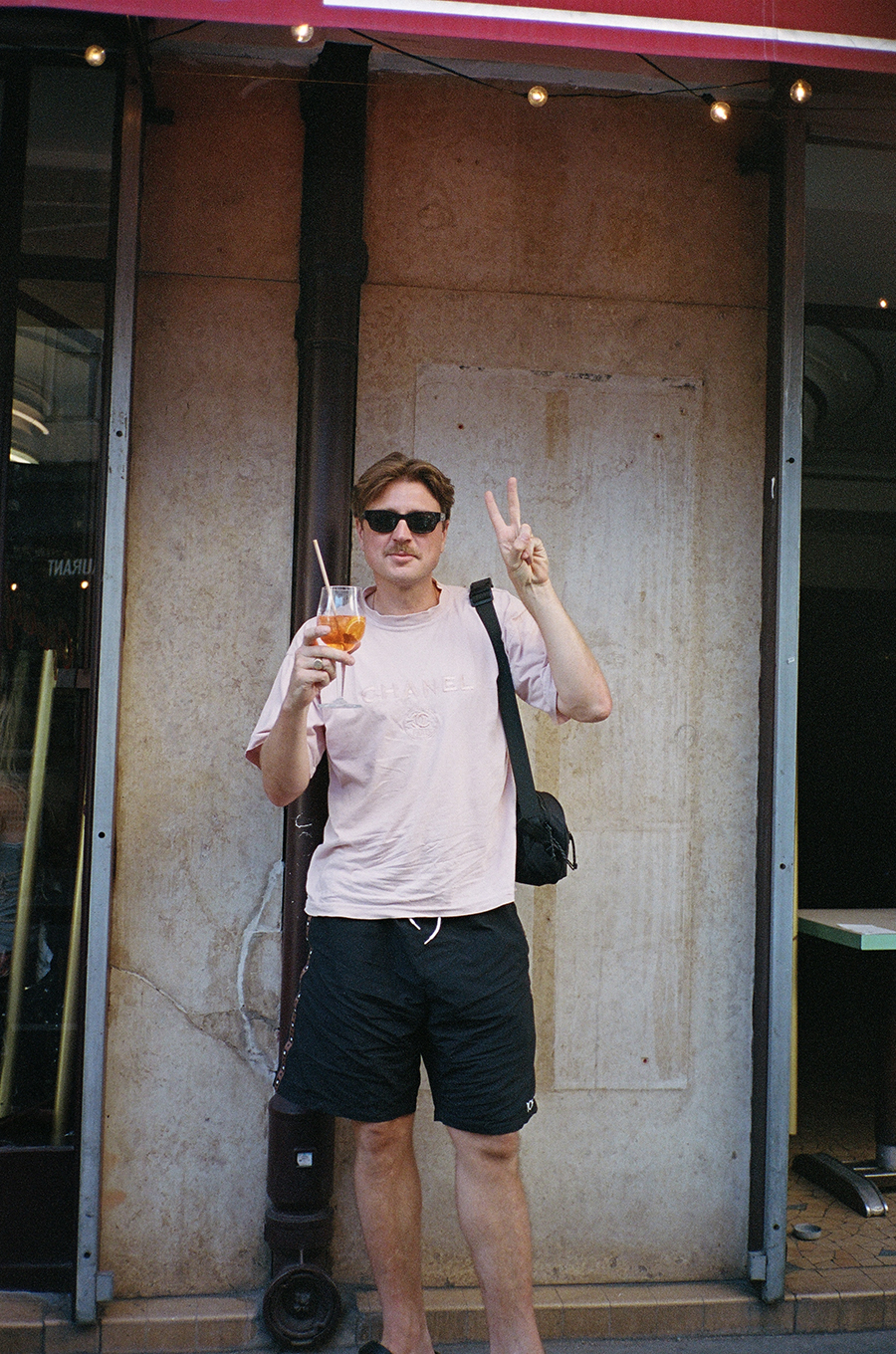 I was in Paris in May and met the boss himself, Bridge Alv. It was great to finally meet in the flesh after years of texting, interviewing and following each other’s work. I don’t want to air Pontus’ life, but it seems that for now he has moved to Paris and is living his best life. While he was there he made me a little sketch which I put in the office, and after chatting for a while he mentioned he could retire tomorrow if he wanted to. Looks like Polar is crushing it. 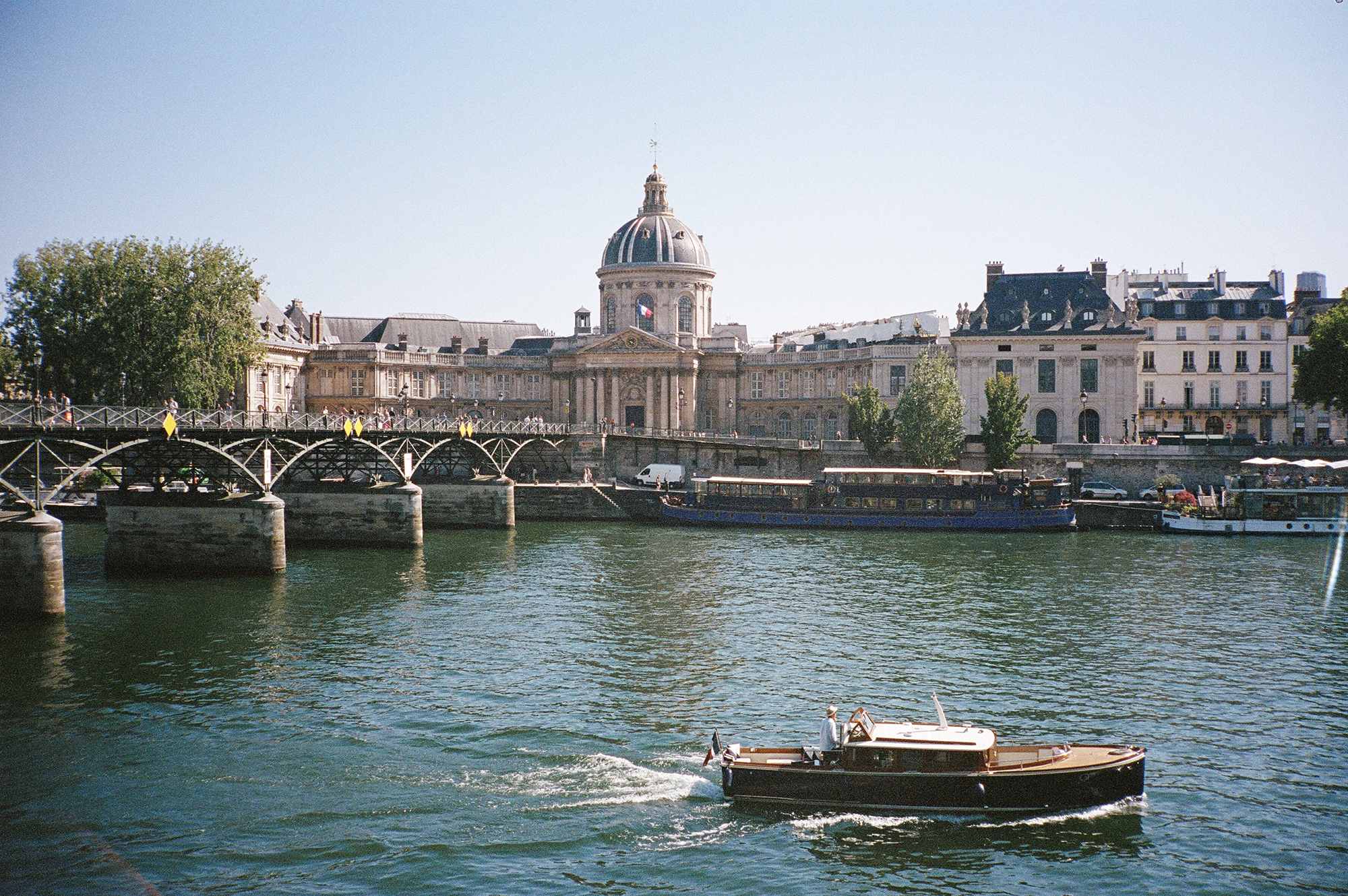 Just a classic Parisian cliche. I really don’t have anything to add, so I’ll let you know what’s going on in the office.

Now that I think about it, maybe that’s not a good thing, because in my opinion what makes good content or good art is people who have different opinions and influences and who uniquely integrate into their work. If we were all inspired by the same five videos and artists, the site would quickly become boring. 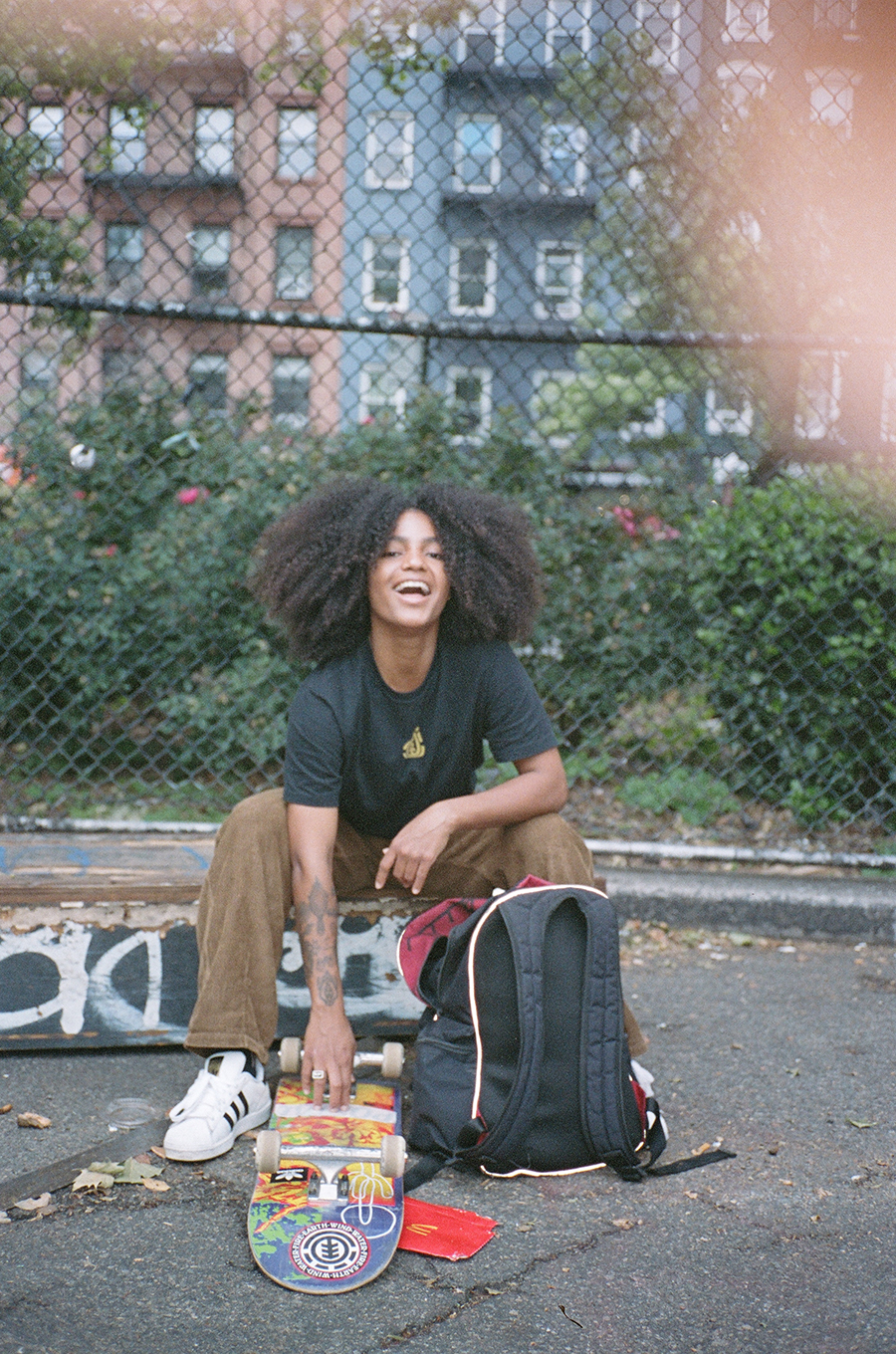 This is Vitoria, whom we met at the start of her trip to the United States. She was very green when we met; her English was limited at that time, but she maintained a bright personality and was always laughing. Several months later, I saw her at the Vans Huntington contest and she was connected and in the fray, like she had been in the American skate industry for years.

I have to say it’s definitely “cooler” when people stay in their home territory and stay a bit mysterious, like Casper Brooker Where Tom Knoxbut if you’re a budding skateboarder and you really want to succeed (i.e. make more money), you’re going to accelerate if you spend time in New York and LA to access those budgets global instead of just localized ones. 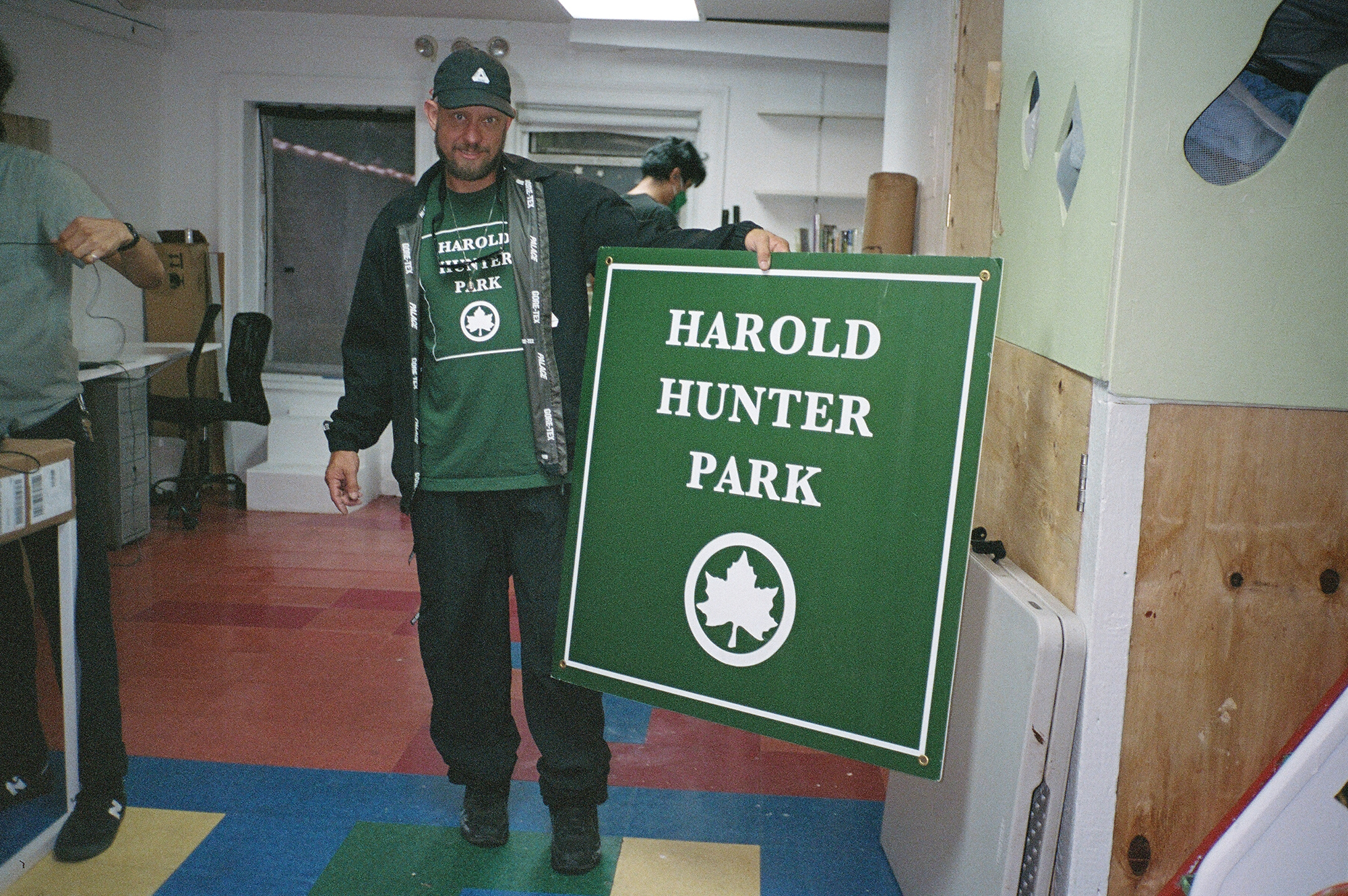 Billy Rohan always has an idea. He’s a mad genius, and he’s been at the dawn of so many potentially game-changing breakthroughs that ultimately failed. A couple I remember from memory: (almost) having Clarks make skate shoes, dropping shipping containers with helicopters in Iraq and Afghanistan full of skatepark gear, and various other projects what really happened.

He is so passionate and always full of big picture ideas that most people would never even imagine. Although he’s originally from Florida, he embodies to me the New York “anything is possible” spirit that was rife before the city was overrun with tech bros and shitty corporate culture. 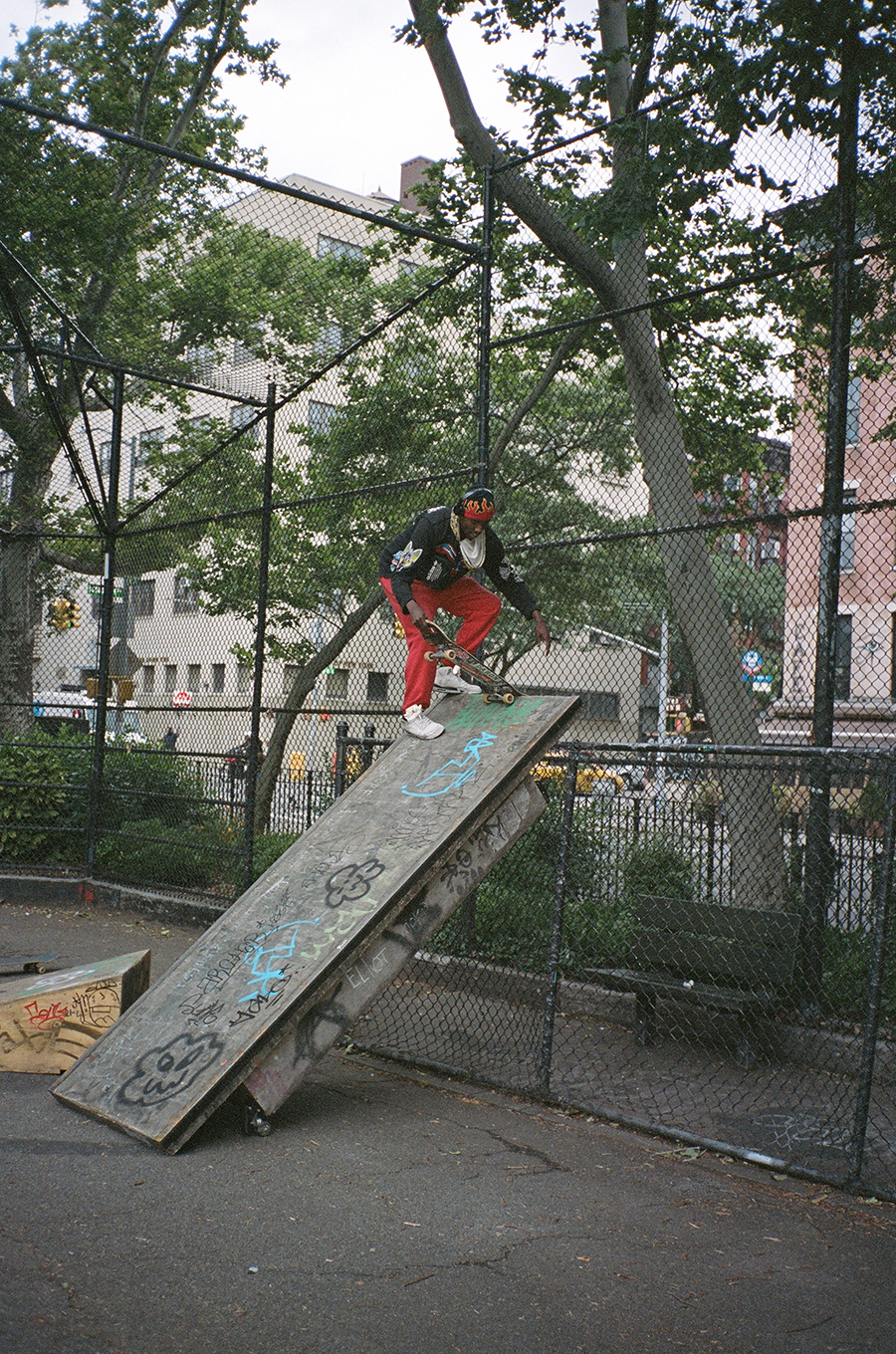 These days, Tompkins looks a bit like your hometown’s seedy but adorable prefab park, except instead of being on a dead end cul-de-sac, it’s right in the middle of New York City. There are also tons of random stoners, walkers, kooks, and any obstacle that comes up there is blown away within two weeks.

Anyone would get bored of skating the same shit over and over again, especially once it starts to disintegrate and weather. Once they get to that point, locals usually reuse them in more creative ways, like this drop-in that looks more like a WWF top-bungee contraption than a skatepark obstacle. 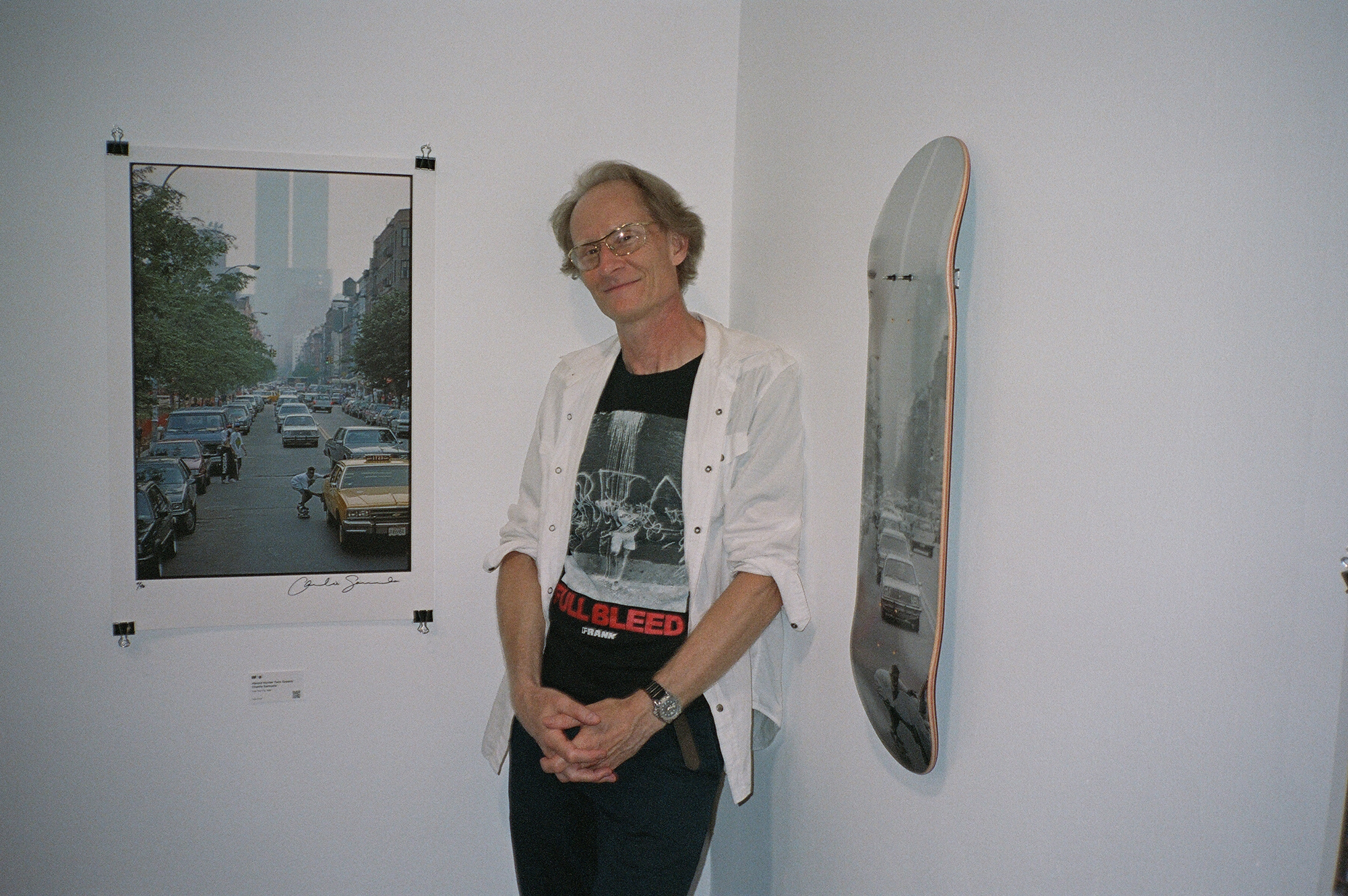 This guy looks a bit like a mad scientist or the owner of a CBD business, but he’s a photographer named Charlie Samuel who took this photo of Harold Hunter skiing in a cab back when they had that classic square yellow look. You can see the twin towers behind him, and overall it’s an absolutely iconic shot. 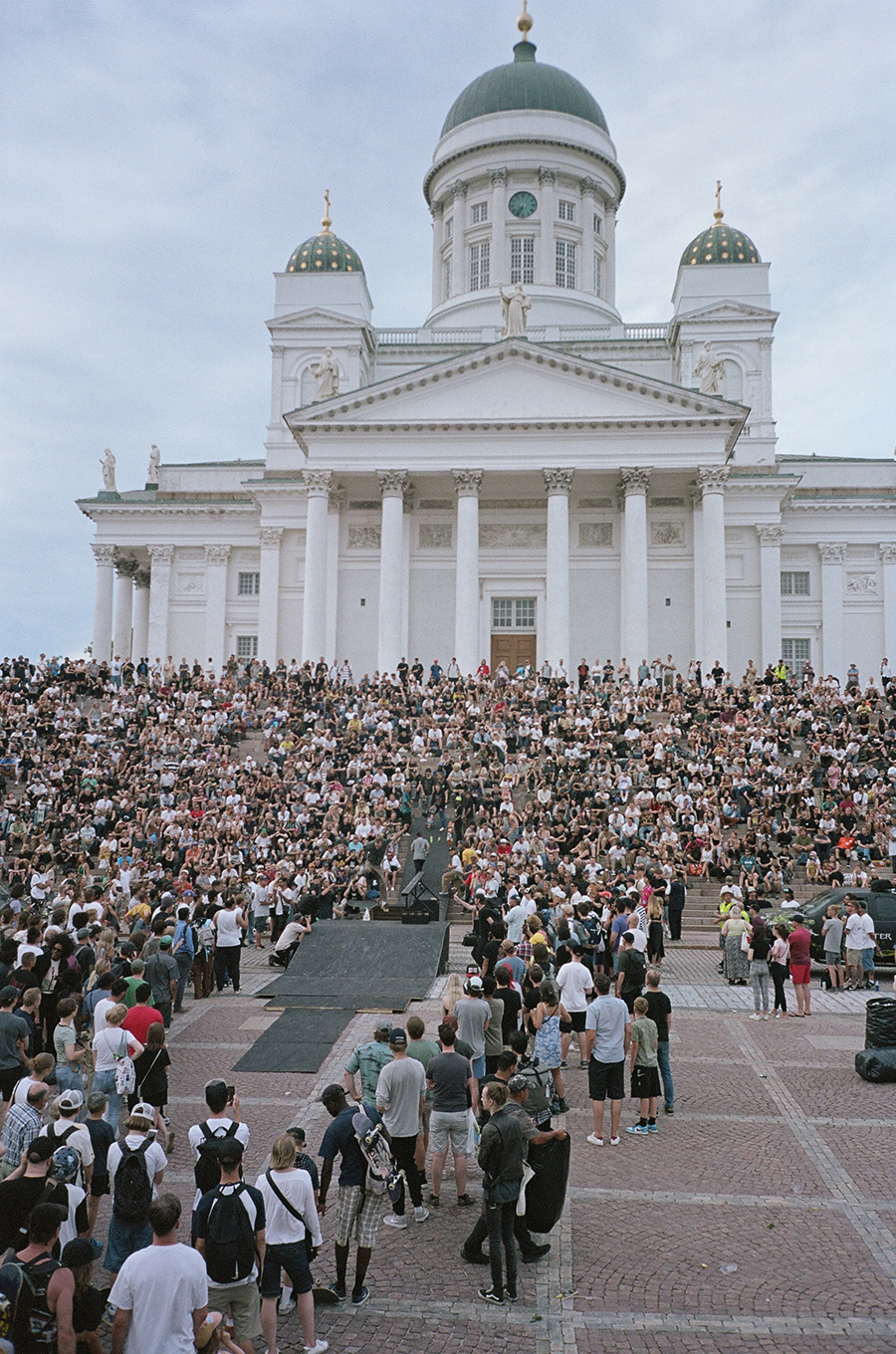 We were in Helsinki for a week and I feel like we really filmed to the max. Every day we were shooting, seven days in a row, and we were super burnt out by the end, but we were able to produce the recap videos of Eetu, Marius, and Helsinki, as well as a social post which got 5 million views on top of everything. It was just Greg and me, which goes to show you really only need a two-person team to get things done. Everyone just needs to be motivated, responsible, and in control of their excessive drinking (which is harder than you might think). 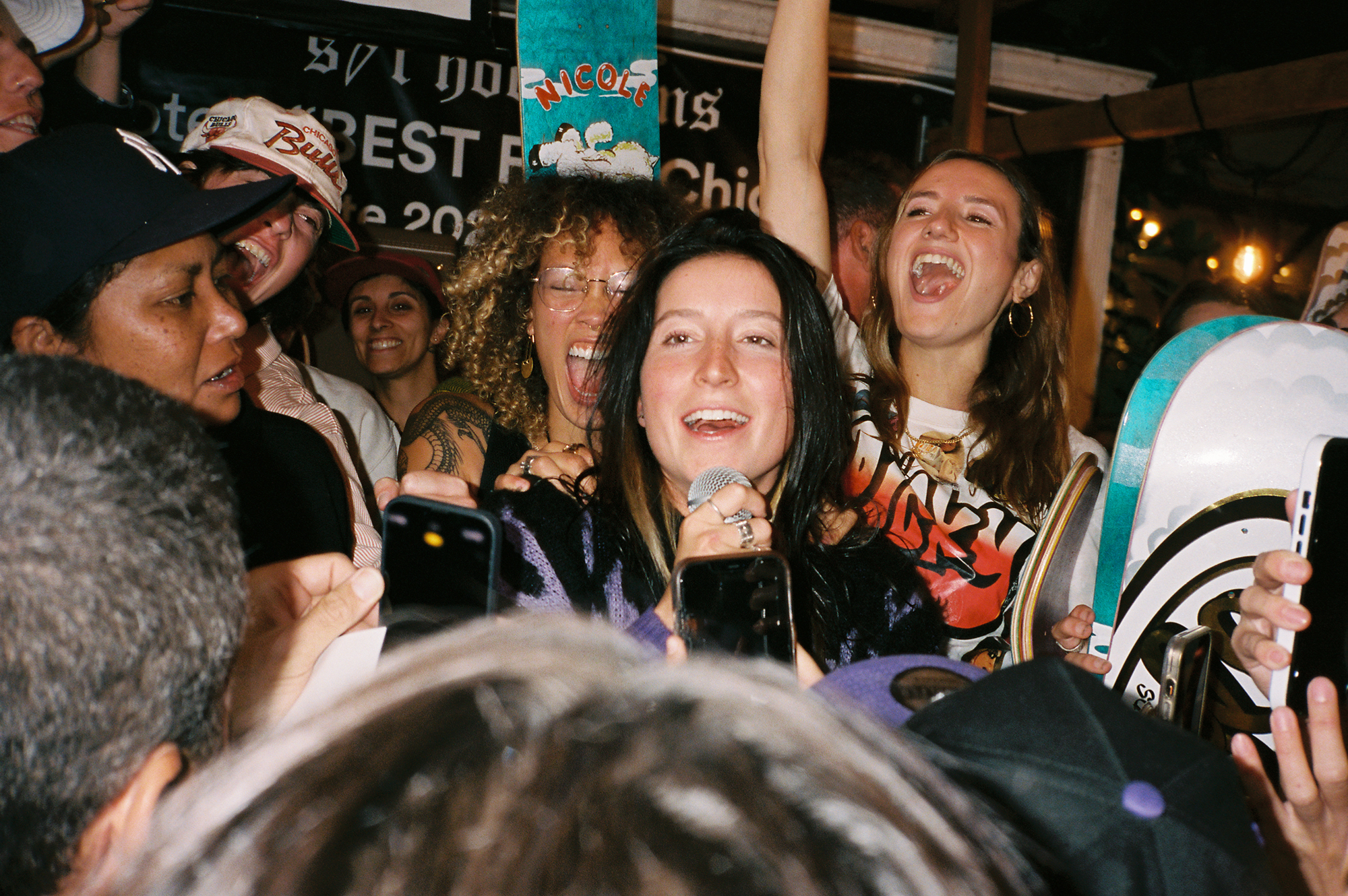 Here we celebrate Nicole Hause’s professional stint at the Wheels of Fortune event in Seattle, Washington. Nicole is so drunk she almost looks like a parody drunk person, with half-open eyes and a blank stare. I know everyone at REAL camp was relieved once this happened since they got their parents and several teammates out, who had to hide and go undetected until the big announcement where they are come out like this scene from american pie 2.

Just kidding, it was nothing like that, I just wanted to rewatch that scene. 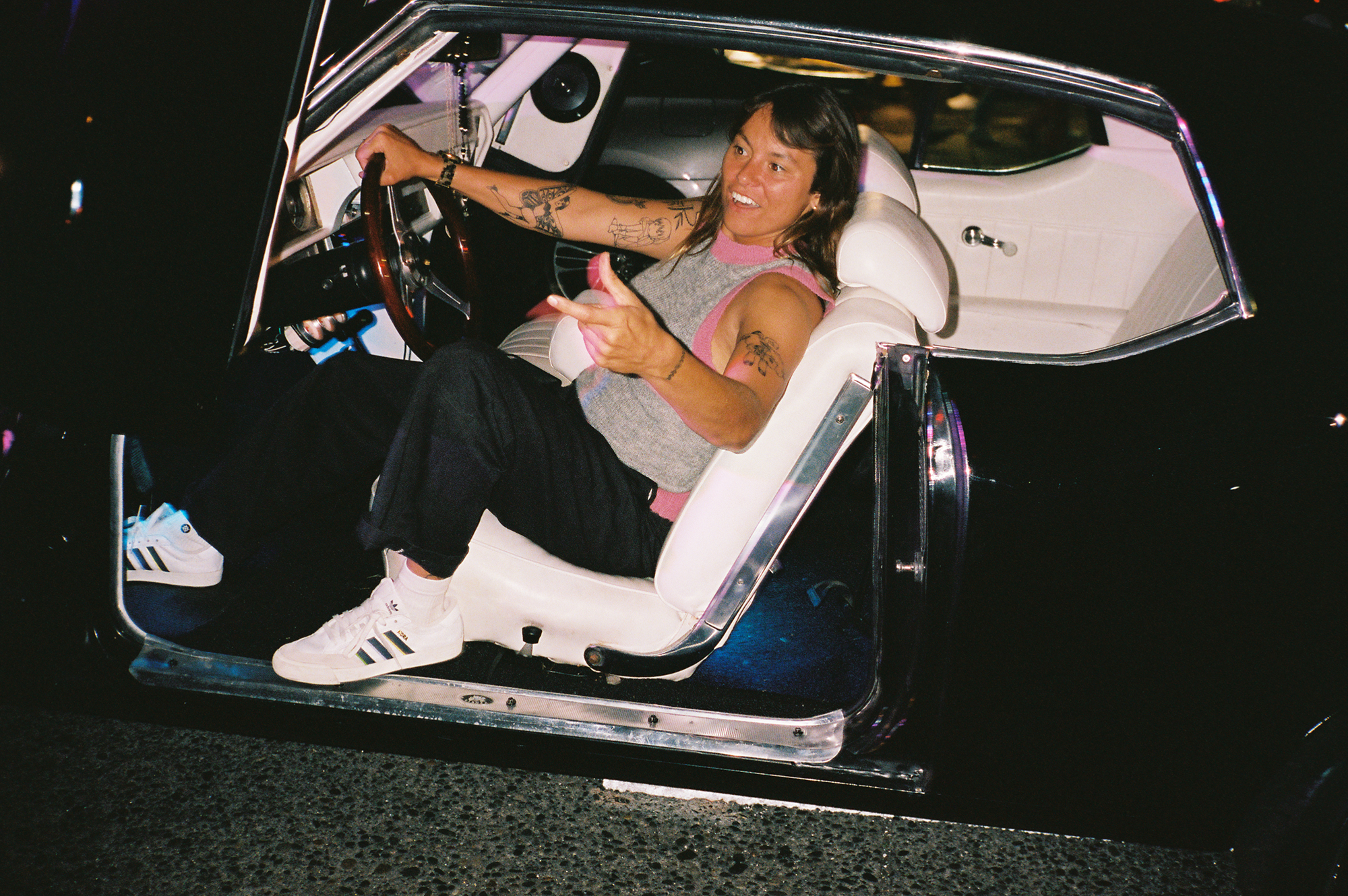 I was thinking about this the other day: what other activities can you participate in besides skating where you have easy access to some of the best in the world? You can walk down a popular street in a big city and regularly come across a high profile skateboarder sitting on a sidewalk right in front of you. You can talk to them, interact with them, and be around them. I can’t say the same for basketball or artistic pursuits like painting or sculpting. I can’t show up at a popular basketball court in Brooklyn and find Kyrie Irving playing with friends, drinking a big boy. 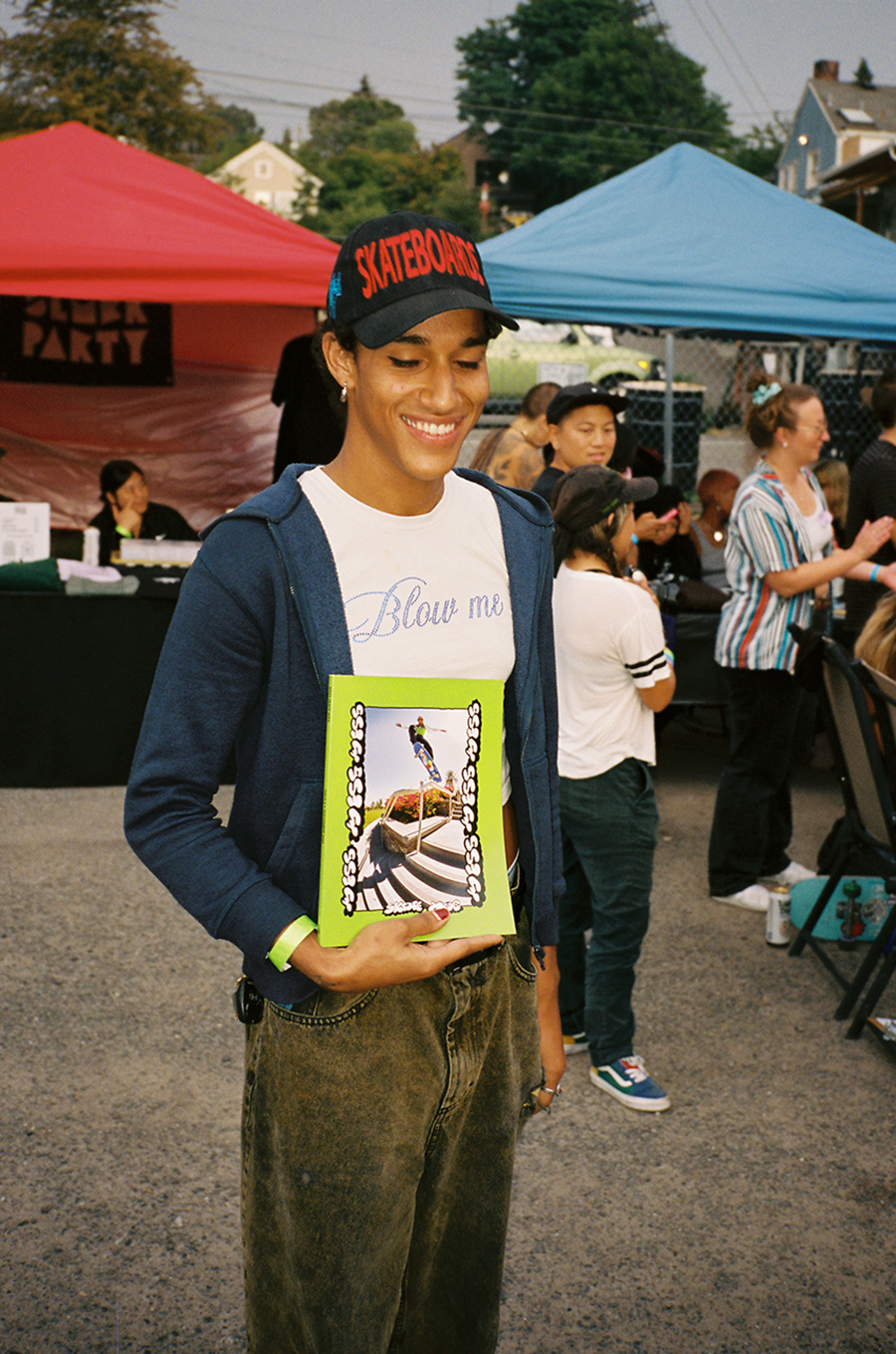 This is Myles, aka @lilshirtbigpantsgirlat Wheels of Fortune surprised by the cover of the latest issue of Mess Magazine, filmed by the adorable Matt Price. If you’re unfamiliar, Mess is a new print magazine from Kristen Ebeling, featuring skateboarding’s underrepresented scenes. They’re into their second issue now and are producing a high quality product, giving some really great shine to some really awesome people who wouldn’t usually get mag coverage, so be sure to check them out if you get tired of it. typical hell the ride content or our site. 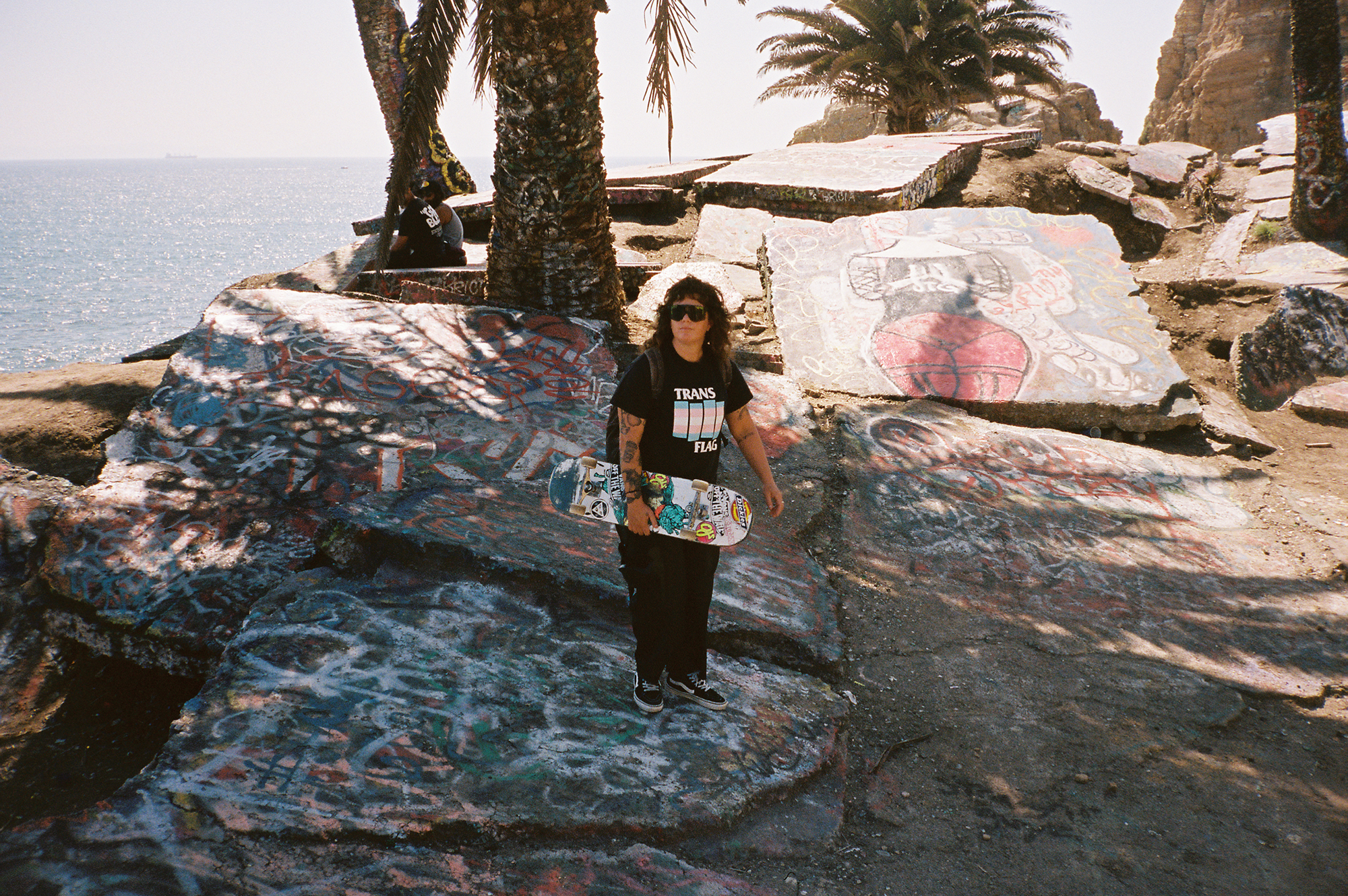 I can’t say enough good things about Sheezy which is rare because like you, I am an overly critical and talkative skateboarder. She has a great sense of humor and a good heart and brings an outside perspective (she’s from Australia) that the American skate scene desperately needs. Since making a living solely from skateboarding in Australia is so difficult, she’s incredibly grateful and down-to-earth when tackling it all. I mean, there are people in our industry who really don’t know how to book a plane ticket because someone else has done everything for them their whole life. This is not an exaggeration. 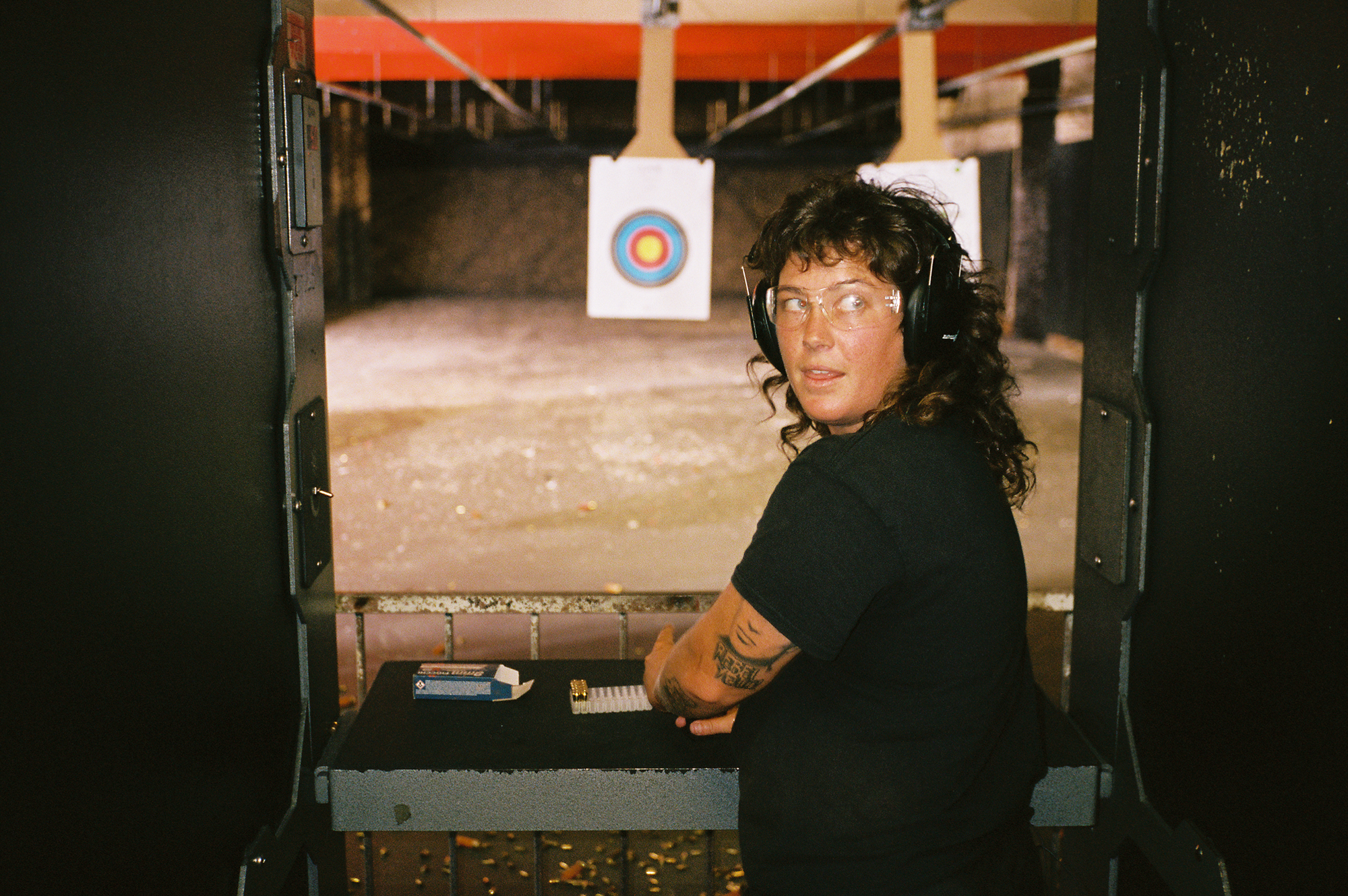 Sheezy came up with the idea to hit a shooting range because we had never shot a gun outside of Counterstrike 1.6 before. You’ll see the experience in our next episode Hanging Out With, but it was really uncomfortable – Some people to our left were firing a shotgun, which you felt vibrate through your whole body when it went off.

The ease with which they just handed over the weapons was on par with what you hear about in the news. You really could be anyone and they would let you in to shoot guns. Once I got used to it, I understood why so many Americans take electric trips and don’t want to lose their rights to own them. It’s like an ultra-deadly, utterly useless comforter, and it doesn’t get more American than that! 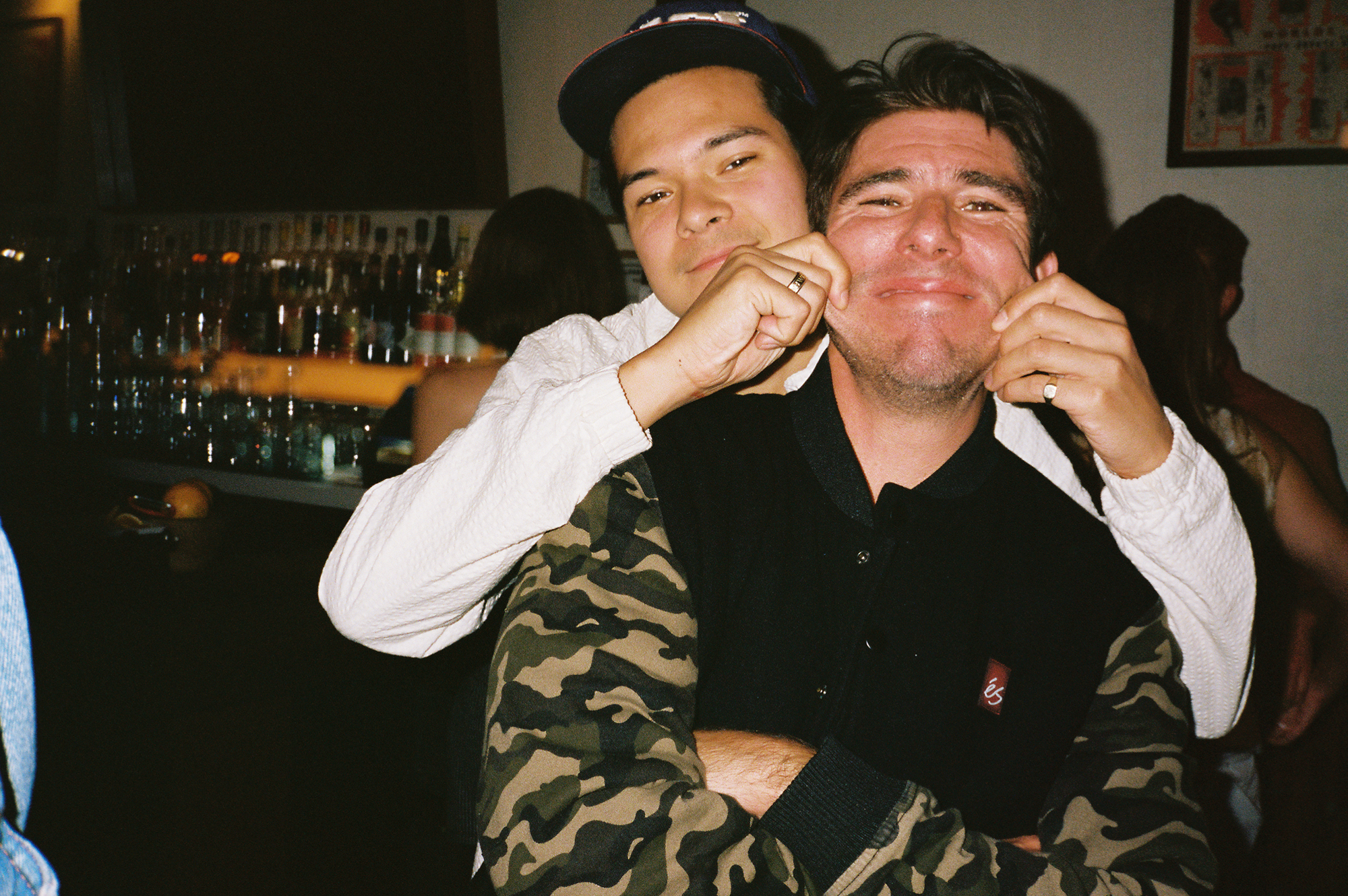 Kelly Hart sent me an invitation to her birthday, which was a nice surprise. I showed up expecting a who’s who of the Los Angeles skate industry to be there, but Kelly went further with family and only invited a handful of his closest friends. , which made the invitation even more special. I wasn’t stuck talking shop with a marketing manager all the time and felt like I was surrounded by real, genuine people who had no ulterior motives talking to me (or me to them). Respect to Kelly for a pleasant surprise.