The bottle will have a design that merges the rich histories of The Macallan’s and Bentley Motors, and it will be available for purchase anywhere in the world in summer 2023.

A look at the Macallan skyline from above

The global collaboration between The Macallan and Bentley Motors, which was first revealed in July 2021, will lead to the production of things that pay homage to the long and illustrious histories of both companies. It is the first expression of this relationship and it represents the attachment of the parties to the concepts of creativity, know-how and originality. The Macallan Horizon is the product of this partnership.

The fact that the limited edition whiskey has no base contributes to its singular appearance and serves as a tribute to the industry trend of homogenization. According to the press release, the bend of the case, which is described as being 180 degrees, represents “the mastery of space and time achieved by The Macallan and Bentley Motors”.

With its unique appearance and vantage point, the Macallan Horizon pays homage to the six pillars that support the distillery. These pillars are what distinguishes the brand from other products on the market. The prototype, which has just been released to the public, is a core component of both companies, and it’s built from “six different materials that are recycled, reused, or ethically sourced.” 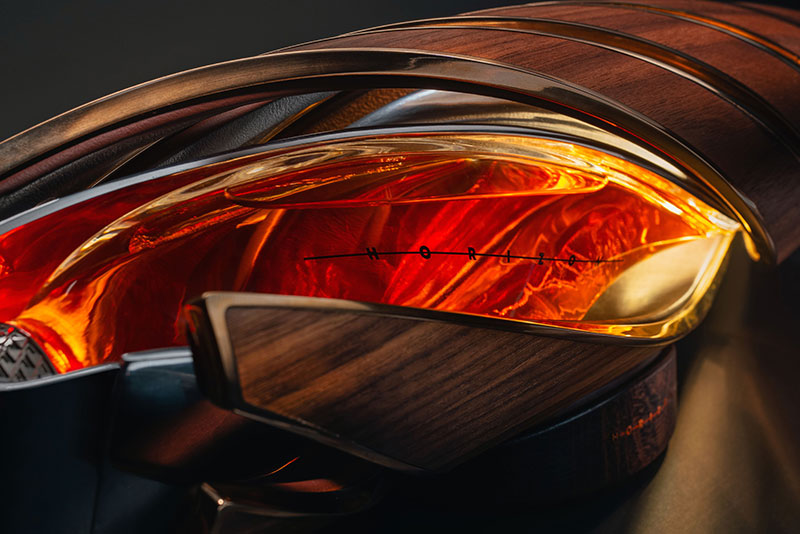 One last thing to consider: the Macallan Horizon wouldn’t be so special if it weren’t for its whisky. Kirsteen Campbell, The Macallan’s Master Whiskey Maker, says a visit to Bentley Motors in Crewe provided the impetus for her creation of the one-of-a-kind flavor profile that has been used in this limited-edition partnership. Here, at the marca’s spiritual home, she has witnessed, firsthand, the shared commitment to artistic endeavours, craftsmanship and technological advancement.

“Our collaboration with Bentley Motors and the information sharing we initiated as a result has pushed us to see things a little differently,” says Jaume Ferras, Global Creative Director for The Macallan, of Macallan Horizon. Everything, including stills and bottles, in the liquor business is presented in a vertical orientation when displayed. Because whiskey must be poured before it can be consumed, we wondered whether or not we could apply a similar arrangement to whiskey after being inspired by the horizontal technique that Bentley Motors uses in the automotive industry.

Chris Cooke, Head of Product and Lifestyle Design at Bentley, said more on the subject: “Our prototype for The Macallan Horizon is truly pioneering in its design and use of materials.” It is a synthesis of The Macallan’s innovative spirit, recyclable materials and the distinctive angles and curves characteristic of Bentley vehicles. The way the light interacts with the dark wood, shiny aluminum and warm copper is extremely dramatic. The shape of the design made it possible to virtually think of light as a separate entity, and it made it possible to do so for the first time. Because it is both visually beautiful and technologically advanced, it serves as a representation of what will result from our collaboration.

In the coming months, price and release date information for The Macallan Horizon single malt whiskey will be available on the Macallan and Bentley Motors websites.